In May 2017, Gradconsult announced the five successful recipients of our microgrants for early-careers researchers, to support them in developing their research, pursuing publication and creating impact. We’re delighted to share the first of a series of updates from these individuals. The following piece is from Andy Fletcher, Durham University, who is making headway with his research looking at links between music and mental health. 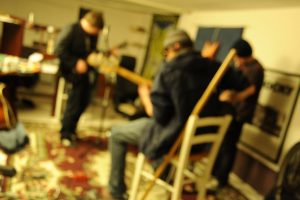 Music increases wellbeing. Some people have a fair idea of how and why this works for them but the reasons differ between individuals. My PhD sought to disentangle some of the connections between music activity and wellbeing for people with mental health issues. Six programme theories (ideas that describe what works, for whom and in which circumstances) were identified around: peer support, energy management, identity, representation, resilience and memory.

In the study, children and young people valued opportunities to identify with a mainstream group, associating with chart songs and reducing their sense of isolation. Adult participants tended to prefer counter-cultural and outsider music as a means to represent themselves, capitalising on their difference to the outside world. Ideas around identity for middle-aged men were particularly interesting. This is a group that is often overlooked; there are numerous services for young people and for the elderly but fewer resources for those of working age. Men over 40 are particularly prone to ‘slipping through the net’, which can exacerbate mental health problems. In the UK, suicide rates are highest for men between the ages of 39-60. This is an age where productivity should be relatively high, where many people settle down, progress their careers and perhaps start a family. For those outside this more traditional route, the middle ages can be particularly difficult. More insidious and longer term issues such as loneliness and social stigma become significant.

Men in their 40s and 50s today grew up with punk, which heralded significant and distinctive subcultural shifts in 20th century popular music. For some, this was the last strong identity they had before dropping the lifestyle to pursue a more mainstream path that, for whatever reason, led to issues with their mental health. For others, who may be marginalised because of their mental health, punk represents a proud (and accessible) retaliation against the society that has excluded them. Some value the opportunity to express visceral anger, whilst others associate the punk era with specific positive memories. This combination of the qualities of punk (and similar) music and timing makes punk and middle-aged identity ripe for exploration. Ideas around masculinity may also be a factor; the study participants (selected using convenience sampling) were predominantly male.

This microstudy uses semi-structured one-to-one interviews to explore more deeply the relationship between middle-aged male identities, punk music and mental wellbeing. The dominant emerging theory is that punk enables a pre-packed yet familiar identity ready to (re)adopt. It is familiar enough to use as self-representation, yet is also underscored by deliberate resistance and as being a vehicle for anger. Publically identifying (through performance) with this style confirms outsider status whilst remaining within a strong and well-established identity. For the men at my study site, this is a key factor in developing resilience, wellbeing and a sense of meaning. The present study explores the social and personal drivers behind such associations to shed light on the relevance of alternative subcultures to middle-aged men in 2017. I expect to publish the findings in Psychology of Music and to circulate any recommendations to participatory music programmes for adults with mental health issues in the UK.

Our Microgrants scheme will open for applications on 1st March 2018. If you would like more information, please get in touch with Kylie Cook.