Are you hitting the ED&I target?

I’d love to get your thoughts on setting targets to improve diversity within organisations.

Recently, I was encouraged to read that 92% of respondents to a research survey in the UK reported that their organisations are already focused on improving diversity and inclusion. (“Let’s Get Real About Equality: When Women Thrive 2020 Global Report“ published by Mercer in March 2020).

A couple of weeks ago, I was pleased to join a roundtable session that demonstrated just that.

Organised by Shepherd and Wedderburn for their suppliers and wider network, it focused on Diversity and Inclusion (or Belonging and Inclusion as some prefer to call it), more specifically “How, when and why are targets set?”. Our discussion got me thinking…

Every piece of literature I have read about improving diversity across an organisation has mentioned 2 things:

• setting targets for diversity and inclusion (and holding people accountable for them!) is key.

In a lot of sectors, the talent pool is far more diverse than is reflected in those recruited into the business and often, that diversity decreases the more senior you go. 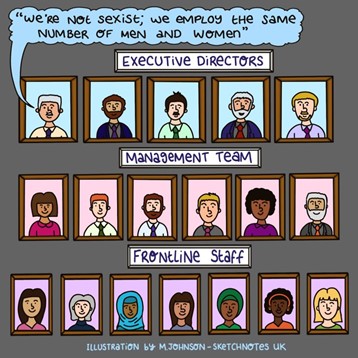 I understand the importance of being able to see someone you can directly relate to; someone who has succeeded in their chosen field, who has been forced to overcome the same hurdles that you are likely to face in your own professional journey. I have had many role models in my career who have provided inspiration, motivation and advice. I’ve also been made aware of how important this is for employees from minority groups who often struggle to get their voices heard.

Targets - What should we be aiming for?

Goal setting has long been used as a tool for behaviour change. Yes, they are a bit of a blunt instrument but they are critical to bringing the change we need to see.

The targets that we set often relate to the demographics of the wider population, but I seem to hear so many “yes, but...” responses (or excuses) in relation to these targets (“We operate in a predominately White part of the country”, “Women don’t want to do this kind of work” etc).

So how do we get around this?

I read some research done by the Harvard Kennedy School (part of Harvard University) which focussed on increasing the representation of women in U.S. tech. They suggested that tech firms introduce a goal of reaching gender proportionality at all levels within five years. Whilst this goal was not a number, it was a very specific target to increase gender balance. In short, the idea is that the ratio of women to men at any level in an organisation should be at least proportionate to the ratio of women to men at the level below.

What do you think?

I can see the benefits. Not only is this a clear target (tick!) but it forces an organisation to think about how employees progress internally and not just about recruitment. It ultimately “pulls through” a more diverse range of people into more senior roles (which, amongst other things, provides role models and mentors for more junior colleagues – tick again!). It also counteracts some of the “yes, but…” excuses I have heard.

I was wondering what the drawbacks were? What holes am I not seeing? Is this too focused on level and not on role? Does it only work if you have a very hierarchical structure? I know there are a range of different approaches when it comes to target setting – what is most effective in your experience?

On a related note – who do you think should be held accountable for hitting these targets?

Should we be looking at our leaders’ “track record” when it comes to the recruitment and progression of those in their teams? Should we reward leaders who hit the targets and penalise those who don’t? Many businesses do this for commercial objectives after all.

I’d be interested to hear your thoughts - pop them in the comments!