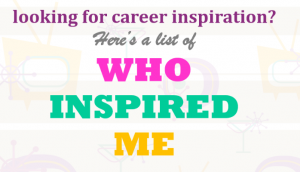 Last week the shortlist for the 2016 Northern Power Women Awards were announced and I'm over the moon to make the shortlist. It's got me thinking about the women who have influenced or inspired me. It was tough but I've got it down to my top 5.

Here I share how I made these connections and what I learnt, in the spirit of what the awards are all about; connecting, inspiring and celebrating power women. I hope this encourages you to make new connections, look around and learn from the power women in your life and career.....

1. Catherine Bouch enabled me to become a productivity ninja

Catherine was my line manager at the critical point in my career when I moved into a management-level role. Like many ambitious and driven people I took on every project and additional responsibility I could. And I soon learnt the hard way that you simply can't keep getting more done by working longer hours. As we reviewed my workload I was saying 'How can I do all this?'. Catherine asked me a different but very powerful question 'How can this be done?'. Immediately a whole host of new options and ideas became apparent to me; delegate up, delegate down, do it differently, out-source, hire a temp, create a stretch project for someone or simply ask for help. To this day whenever I start to feel overwhelmed I ask myself this question.

2. Diana Buckley challenges me to be better

Diana manages one of the first contracts we won after establishing the Gradconsult business, RISE Sheffield. She was, and still is, demanding and exacting in her focus on delivery and ethical standards. For her there is no compromise on either account and nor should there be. And yet this was far from a difficult client-supplier relationship, it was a delightful one. Di is personable, humble, direct, forthcoming and conscientious. She has shown me how to hold herself and others to the highest possible standards, in a kind and engaging way. She is a constant inspiration to me to be better and do better.

Miranda was another fantastic line manager who made a big impact (top tip to always choose who you work for carefully!). Energetic, creative and keen to make a difference I always had an idea or an opinion to add in to our conversations. But despite my positive intentions Miranda helped me to realise that what I was actually doing (most of the time) was waiting for my turn to talk, rather than really listening to people. Worse than that, sometimes I was so excited I couldn't even wait - and spoke over people. With her skilled feedback and coaching I started to quiet my mind, focus on the people in front of me and truly started to listen. What a gift and how much I have learned as a result.

4. Helen Bostock spotted my board potential and nurtured it

I saw Helen speak at an AGR conference over 15 years ago. She is an awe-inspiring woman with a presence and impact that I had rarely experienced before or since. Helen encouraged me to get more involved in AGR eventually sponsoring my nomination onto the board. Aged just 26 and surrounded by hugely talented, senior and influential leaders in my field I had never felt more out of my depth. But Helen believed I would thrive in a more strategic and challenging board environment. And she was right. I loved every minute of it, learnt volumes and absorbed as much knowledge, insight and skill as I could from the other incredible men and women who made up that board. Not least from Helen herself and the Chair of the board Alison Hodgson who was and remains my media guru.

5. Julia Rogers showed me the power of empathy

Julia was one of the few women I knew of operating at a Director-level in the business I was in. She was one of the first women to go to Sandhurst and had a strong leadership reputation. So, when there was an opportunity to work with her on a project I jumped at the chance. But it was something much more valuable than her perceived strength that I picked up from being around her; it was her understanding of people, even when they were at their worst, most vulnerable or in crisis. This ability to deal with difficult issues in a constructive, honest and sensitive way created huge loyalty amongst her team and critically delivered results. She showed me that empathy and emotional intelligence were not weaknesses but would in fact be the greatest and rarest talents I could nurture.

And whilst it's a bit of a cheat, as I've already had my top 5, no piece of this nature would not be complete without mention of the matriarchy. I grew up surrounded by intelligent, strident, and kind women who gave me some incredible gifts; a strong work ethic, self-belief and a positive, growth mind-set.

I am privileged to know and have worked with a lot of extraordinary women, far too many to name here. I want to say thank you to them all for helping me along the way so far and no doubt for the many more lessons to come.

Having read this I hope you feel encouraged to also seek out great people to learn from, to make connections, seize opportunities, elicit and act on feedback. There are so many talented and inspiring women (and men) happy to pay it forward, but often you need to find them rather than the other way round!