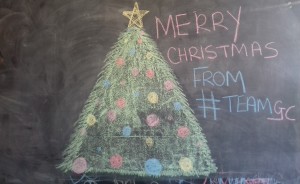 Christmas was near, and up in the towers,

GC was preparing, for the last festive hours

The prosecco was popped, the mince pies were flowing,

The party was hopping, the crackers were cracking,

presents were plundered, the empties were stacking.

Then from the corner, a sound unexpected,

The boss sauntered over, and flung open the door,

she couldn’t believe, who was out in the hall.

From his boots to his hat, the man was a scene,

of red white and black, though his elf was in green.

It was the father of Christmas! The santa of Claus,

what was he doing, at GC’s front door?

“You must help me” said Santa, “we’re caught in a pickle,

the elves have gone grumpy, gift production is down to a trickle”

“But Santa”, said the consulters, “what can we do?

We can’t reach the north pole, even for you”.

“The elves need some training, they should be inspired,

instead they’re distant, unfocused and tired”

“At this rate the presents, won’t nearly be ready
,
no socks for the dads, for the kids not a teddy.”

“Oh no cried the gang, we really must help,

grab the emergency spreadsheet, down from the shelf”

The elves were assembled, the whiteboard was cleared,

The importance of teamwork, the need for free speech,

the angle of stockings, the consulters did teach.

By the end of the session, an agreement declared,

more hay for the reindeer, a mince pie profit share.

Santa hugged the consulters, and shook each by the hand,

“Christmas is saved, it’ll go on as planned!”

And so GC, helped Christmas get through,

and we all offer, a Merry Christmas to you!